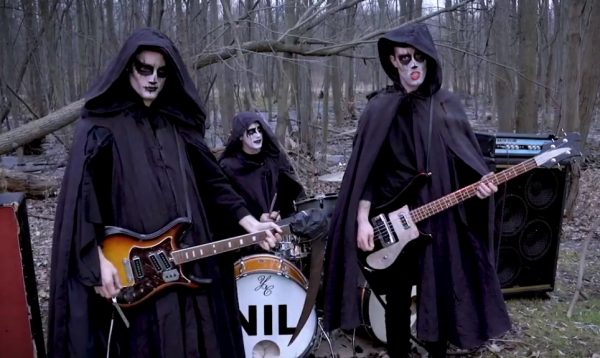 Has anyone else noticed that it’s no longer DARK ALL THE TIME? Driving to work in daylight is a godsend. Smiles and sunshine all round from now on, please. It’s almost the weekend, and your favourite blog post is strictly POSITIVE VIBES ONLY.

“Don’t forget to remember who the fuck you are!” Wise words from vocalist Emily Nokes of the indie surf-pop band Tacocat — one of the best names in the business. The twangy guitar-led track is the first cut from their upcoming album, ‘This Mess Is A Place’, which will arrive on May 3.

And, if room temperature milk, dyed blue, stood in giant wine glasses while some of Seattle’s best performers bust a move is your thing — because why wouldn’t it be? — be sure to check out the colourful video!

It’s time to freak out. The funk legend has been confirmed to curate the 2019 instalment of Meltdown Festival, and it’s gonna be huuuugeeeeee. The 26th edition of the event will take place at the Southbank Centre in London, with acts selected especially by the producer, songwriter, musician, composer, guitarist and sonic trendsetter Mr Rodgers himself, of course synonymous with the 1970s disco band CHIC.

Of this prestigious position, he noted:

“To be able to curate and produce nine days of live music for the city of London, the UK and music enthusiasts visiting from all over the world is truly a dream come true. Anyone who knows my career knows that Funk, Disco, Jazz, Soul, Classical, POP, New Wave, R&B, Fusion, Punk Rock, Afrobeat, Electronic and Dance music all play a role and you can expect that to be reflected in the performances we are planning.”

The Canadian punk trio have released another wacky video. If you like punks playing guitars and eating doughnuts, I’m sure you’ll like grim reapers playing guitars and eating doughnuts. Struggling at work to get their soul count up, the slackers end up hotboxing and playing their catchy song in the woods rather than doing any work. Don’t go getting any ideas, though…

Unless the idea is making a last minute trip to London tonight to catch their headline show at the Moth Club, which unbelievably is not yet sold out.