Oh, hi. I didn’t see you there. You like music? This is the place for you.

It’s time to flex your musical muscles once again – Cardiff’s Sŵn Fest have confirmed their line up for autumn – and what a banger it’s set to be. The event is set to descend upon Wales’ capital between October 18 and 20, with some awesome up and coming acts set to perform across the city.

First, we’ve got jazz extraordinaires the Comet Is Coming, whose fervent instrumental songs have had us in the office hooked for weeks. Also on the line up we’ve got Rebecca Taylor’s Self Esteem project, whose recent album ‘Compliments Please’ was an immediate critical darling upon release. Oh, and don’t forget all that noise rock from the boys in the Pigs Pigs Pigs Pigs Pigs Pigs Pigs camp. Oink.

Also on my radar for the weekend is Nilufer Yanya, and She Drew The Gun, who were featured on the soundtrack to the BBC drama Killing Eve, Skinny Pelembe and Rozi Plain. Check out the full line up, then book tickets here. 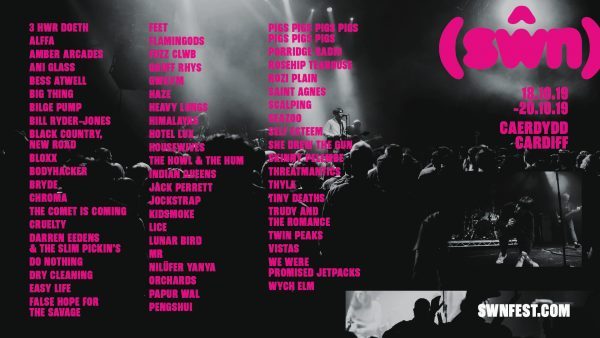 A press release came through the inbox this week, which at first seemed to look like any other press release. A headline, a poster, some tour dates. But wait, look again at the headline.

We Are Scientists? 50th Anniversary? Wasn’t this the same indie-pop-rock band that I was into when I was 14? The first band I interviewed as a student newspaper editor, about their fifth  album ‘Helter Seltzer’, in around 2016? Even with Keith Murray’s grey hair, SURELY they’re not that old?

Then I read on, to a statement from Muray.

“A long time ago our management came to us and suggested we do some With Love & Squalor shows on the 14th anniversary of its release, which we thought was pretty dumb. ‘Come back to us on a real anniversary,’ we told them. Fast-forward to a couple weeks ago, when they told us big 50 was coming up. I’d say that’s worth celebrating.”

In true WAS style, they’re trolling all of us.’With Love And Squalor’ was their debut album and came out in 2005. It’s 14 years old this year. But why not do a 50th anniversary tour? Banter. Check out the full dates and book tickets here. I will probably attend, if these guys are as funny live as they seem!

As seems to be a recurring theme recently, the final installment of Things We Love This Week is dedicated again to a gig I attended this week – Stella Donnelly at Bristol’s Thekla. If you don’t know Stella Donnelly – and you do like fingerpicked guitar, mesmerising vocals, cutesy indie pop songs and ramen, then she is the musician for you.

Her debut album, ‘Beware Of The Dogs’ arrived in March, with a firm angle on not taking any shit from anyone. Track Boys Will Be Boys, also featured on her first EP ‘Thrush Metal ‘(“I’ll keep putting it on albums for as long as I have to” said Donnelly), has a clear message: men are trash, but frequently get away with misogynistic and abusive behaviour because they can get away with it with barely any repercussions. At the live show on Wednesday, she’s transparent that no, this isn’t all men. But they do exist, and these topics need to be talked about. TOO RIGHT STELLA.

On a happier note, she performs her excellently written, sarcastic and hilarious song with a huge smile, and even throws in a dance routine. There’s a first. More indie bands should incorporate dance routines into their shows – I think it would let people loosen up a bit.

Better yet: there’s still dates left on her UK tour! Get tickets here.