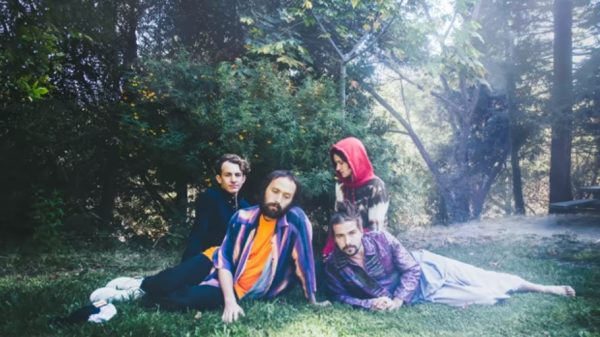 For the sake of my (thousands of) readers’ sanity, I will forgo listing the National in today’s edition of Things We Love This Week, because you’re probably all sick to death of it. Although, they did release a new single AND announce film screenings and listening events of ‘I Am Easy To Find’, all over the world. Not that you’re interested, of course…

In other news, I found out today that Dan from Bastille shaved his head recently, and I couldn’t be happier about it. Once known for having the tallest/most annoying do in pop, he’s now just a (not so) humble skinhead. Peace at last. They’re touring and you can see it for yourself.

There’s something about Big Thief that I just can’t pin-point – perhaps it’s their luscious instrumentation, perhaps it’s whispered, delicate voice of Adrienne Lenker. Perhaps it’s because their new album cover is just them chilling in the woods. Perhaps it’s just a combination of everything. Either way, they make some darn good music. Their latest album, ‘UFOF’, dropped today, after releasing the single Century on Wednesday.

The track’s  jangly guitars remind me (fondly) of the Isley Brothers, while Lenker’s lyrics touch on the sensation of cool autumn rain. It’s pretty much perfect whatever way you look at it. Let’s hope the rest of the album follows suit, eh? Just kidding. We know it will.

Today, they announced their third album, the imaginatively titled ‘III’. It’ll arrive on June 21 through Loma Vista recordings. Alongside the announcement, the band have shared two tracks: Lake House and I Love You, I’m Sorry, Please Help Me, Thank You. Andy Hull is the best in the biz’ when it comes to making sensational and dramatic albums, and from the sounds of it, ‘III’ is bound to be more of the same. Yipee!

I’m all about not judging books by their covers, but what about bands by their name? It probably shouldn’t be the way for a serious music journalist, but how can you not listen to a band called Porridge Radio when it appears on your screen? Is it a radio made of porridge? Is it porridge made of radio?

It’s actually a sort of alternative punky pop band made of chaos and some sort of wooden agogo. They are getting ready for support slots with Ezra Furman at the end of the month and a set at the Great Escape next weekend. Listen to their new single, Don’t Ask Me Twice.

Thanks for reading, kids! You truly would be the light of my life, if it weren’t for reduced price Easter Eggs. I mean that from the bottom of my heart.