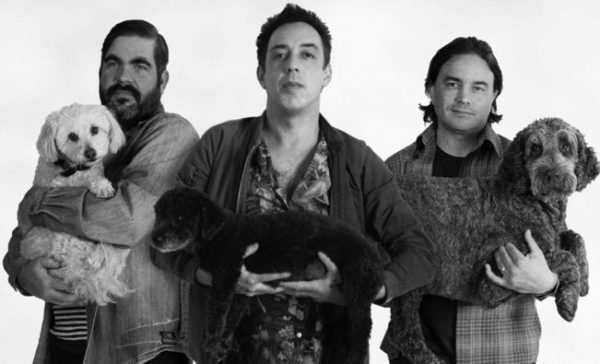 It’s me again, your friendly neighbourhood indie kid, ready to put some great musical-based items straight into your brainbox. Are you ready? No? Well, it’s too late now, isn’t it.

I won’t lie to you: if the press shot (above) wasn’t amazing, this track might not have made the cut as a Thing We Loved This Week. As it stands, I can see three puppies. You do the math. Wolf Parade’s Against The Day is a catchy synth-pop number with an earworm of a main melody that it strangely reminiscent of something else, something poppy, big and bold… like if Future Islands made something a bit more stompy.

Wolf Parade are touring the UK in March 2020, and tickets are available now.

Get out your gym shorts and weightlifting paraphernalia, because the new one from Beach Slang is HEAVY. Like that classic American heavy rock of the 1970s, we’ve got tightly wound distortion and simple rhythms for some storming  guitar riffage. Excuse me while I get my Harley Davidson from the garage.

Our dear friend Matthew Berninger has announced a solo album! Best known as the frontman of the National, he’s also worked on numerous projects over the years, like El Vy with Brent Knopf of Ramona Falls, and just yesterday put out a collab with Phoebe Bridgers. Although no date has been confirmed yet, we do know the LP will be called ‘Serpentine Prison’, and that production and arrangements come from Booker T Jones.

Kind, patient, visionary genius @bookertjonesmusic produced and arranged my solo record. It’s called Serpentine Prison.🐍 More about it soon but basically I’m the luckiest man in the universe with lots of brilliant friends who can play instermints. Not worthy! 🙏🏻📖 💕🧤 Booker’s incredibly inspiring memoir, Time Is Tight, is out 10/29. NYTimes link in bio. 📸= @oldstyleguitarshop

You don’t need me to tell you that the National are hitting the UK in December, because you’ve already got tickets for the Cardiff show, haven’t you!? SNAP.

Is it acceptable to be squealing with excitement? Yes.