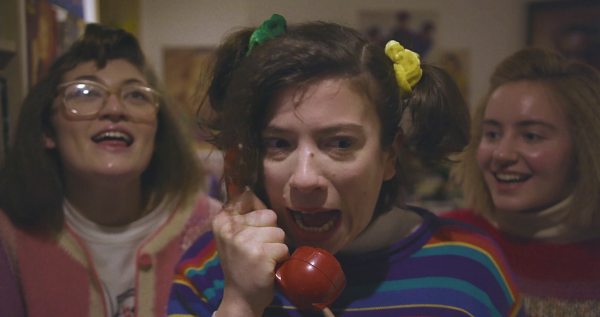 Happy Valentine’s Day young lovers! And old lovers, and non-lovers, and animals and single-celled organisms. Whether you agree with the heartfelt sentiments or think it’s a mostly commercial trickery, there’s one thing we can agree on: today is just another excuse to gorge on chocolate, really. This week we are feelin’ the  love, and our hearts belong to awesome music.

Firstly, we’ll hand the reins over to Girl Ray, indie-poppers with a funny streak. Their latest single takes our love theme and gives it a platonic twist, focusing on the strength and solidarity that comes with your pals. “In music, friend love is often overshadowed by romantic love and IT’S JUST WRONG. This one goes out to the mates of the world,” said the trio.

We feel ya. Friend Like That, from the band’s recent album ‘Girl’, melds a variety of synth styles,  including elongated spaceship sounds, organ tones and a bouncy bassline to prove this love, while its accompanying video finds the band stuck in the ‘80s and being tricked by nasty high school boys. At least you’ll always have each other! Girl Ray are touring the UK this month, and tickets are on sale now!

We love it when an artist’s effervescent personality comes out in their work. Stella Donnelly has smashed this time and time again since her EP ‘Thrush Metal’ and further on full-length ‘Beware Of The Dogs’. Today, she covered John Paul Young’s Love Is In The Air. Yes, this really happened, and yes, it’s as great as it sounds.

Performing for Triple J’s Like A Version, Donnelly and her band bring a summery, beach-pop aesthetic to the crooner classic. Her incredible (and let’s face it, flawless) vocals take centre stage, reaching the high notes with such ease that it’s like listening to a walk in the park. Absolutely gorg.

Finally, we’ll round off this post by proposing the motion that everyone should love each other. Scottish post-rockers VASA today released a new single, Mini-Boss, which takes a stand against bullying. Well, kinda. It doesn’t actually have any lyrics, but the sentiment still stands.

Drummer Niall MacRae said: “Mini-Boss is, at its core, about overcoming personal hurdles, where the term literally means your first ever bully—that miniature tormentor who would seem totally laughable to you now. It’s a representation of those small moments made huge in your adolescent life, where your decisions allowed you to overcome strife.” The group are set to play ArcTanGent this summer and are on tour with Thank You Scientist this month.

Au revoir, my friends, and remember to be kind to people! Happy Valentine’s Day ❤️