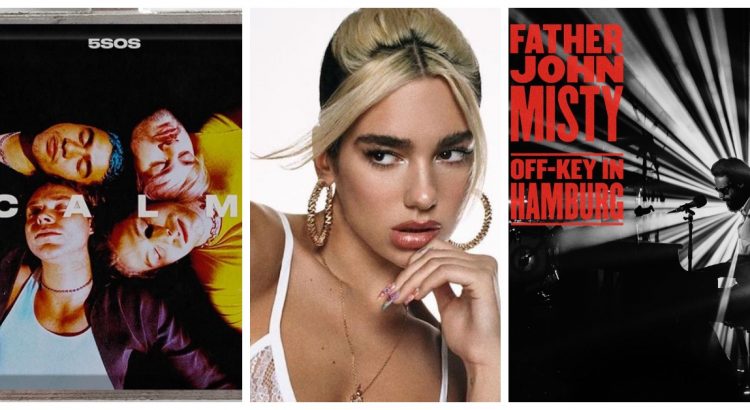 Hello one and all! My name’s Sophie Williams and I am now in charge of Things We Love This Week, the lovely little section of Stereoboard that you are viewing right about now. It’s here where I am free to wax lyrical about the best musical releases of the week, and if all else fails, natter on about upcoming artists that I’ve been keeping an eagle eye (and pair of ears) on — lucky me!

Well, to start, it has been quite the week, hasn’t it? With the country now under lockdown for at least three weeks, music may be acting as a refuge for a lot of us in this current state of crisis. I, for one, have been finding some comfort via the boy band that I grew up with: 5 Seconds Of Summer. Throughout my early teenage years, 5 Seconds Of Summer (or 5SOS, as I still affectionately call them) became the grid by which I learned music fandom, social networking and the ways of a subculture. Given my personal history with the band, you could call this comfort listening, perhaps, but if 5 Seconds Of Summer have sonically matured into a watertight pop-rock crossover outfit, should I even be ashamed? Let me elaborate…

Okay, so hear me out — *clears throat* — 5 SECONDS OF SUMMER ARE A GOOD BAND. A very good band, in fact. Now that they have parted ways with their questionable pastiche of post-adolescent, angsty pop-punk in favour of sleek, synth-laden power pop stompers, 5 Seconds Of Summer in 2020 are a band renewed.

Today (March 27), the Aussie rockers have released ‘C A L M’. It stands out as their most polished work to date, complete with syncopated drumbeats, flourishes of flashy synths and psychedelic guitar leads. The album’s fourth single, No Shame, marks a particular highlight; lyrically, it satirises self-obsession and toxic fame chasers atop a thumping bassline and falsetto-laced vocals, which work together to make a memorable, yet addictive chorus. Elsewhere, Wildflower offers a fun, choose-your-own adventure style refrain and the echoic Easier plays up to the band’s newfound penchant for dark, gothic synth-pop.

‘C A L M’ is a confident step forward for 5 Seconds Of Summer, and it begs for the attention of their many naysayers. Go on, give them another try. You know you want to.

5 Seconds Of Summer will support ‘C A L M’ with their No Shame World Tour, which is set to hit UK arenas in May 2020. Tickets are on sale now.

If you haven’t heard already, Dua Lipa’s second studio LP, ‘Future Nostalgia’, dropped earlier today. Prior to its official release, Lipa had already enjoyed great chart success via a string of disco-inflected singles, including the chart-topping Don’t Start Now. The cream of that crop, though, is relatively easy to identify; Break My Heart is the fourth single to be taken from ‘Future Nostalgia’ and it recently arrived in a blaze of pink neon.

Break My Heart works tirelessly to prove that it owns the dance floor, sneaking in a sample of INXS’s 1987 smash-hit single, Need You Tonight, on the way. Over streamlined, slinky synth breaks and bursts of disco shimmy, Lipa delivers punchy vocals as she demands answers from a potential lover. “‘Cause now there ain’t no letting you go, Am I falling in love with the one that could break my heart?”, she questions, marking out a party-ready, anthemic chorus. The track oozes euphoric confidence of the highest order, and quite frankly, is the best thing that Lipa has released to date.

After listening to Break My Heart at least 30 times on loop, I’m about to get my teeth stuck right into the rest of ‘Future Nostalgia’. I suggest that you do the same, even if it is the only thing that you achieve in quarantine today.

Dua Lipa is set to tour the UK and Ireland in January 2021 as part of her Future Nostalgia World Tour. Tickets are on sale now.

Throughout the week, I have found myself going back to Father John Misty’s ‘Pure Comedy’ many times as I’ve been working from home. If you haven’t given it the time of day prior to reading this, I urge you to do so. Revel in all 75 glorious minutes of it. I mean, given the current situation, you know you’ve got enough time to spare…

Earlier this week, Father John Misty dropped the transfixing ‘Off-Key In Hamburg’, a surprise 20-track live album. Recorded last August in Hamburg, Germany with his band and the widely acclaimed Neue Philharmonie Frankfurt orchestra, the career-spanning tracklist traverses through the finest cuts from all four of Josh Tillman’s studio albums. The best part? He manages to squeeze in his magnum opus, the 13-minute Leaving LA, taken from the seminal ‘Pure Comedy’.

‘Off-Key In Hamburg’ may leave us wishing for the times where we were able to safely attend gigs, but in this current climate, it works as a balm to help these days pass by even quicker.

It must be noted, however, that some of the tracks here, particularly those taken from ‘Pure Comedy’, feel more apt than ever during this global pandemic. Though the record was unveiled in all its glory back in 2017, when listening in 2020, its prophetic and intricate premonitions about the human condition translate to insightful reflections on the current crisis that is taking place all around us. To leave you in the words of Mr. Tillman: “I hate to say it, But each other’s all we’ve got…”

‘Off-Key In Hamburg’ is available to stream or purchase via Bandcamp. All proceeds will be donated to the MusiCares COVID-19 fund, which aims to provide relief to those in the music industry that have been drastically affected by the coronavirus pandemic.