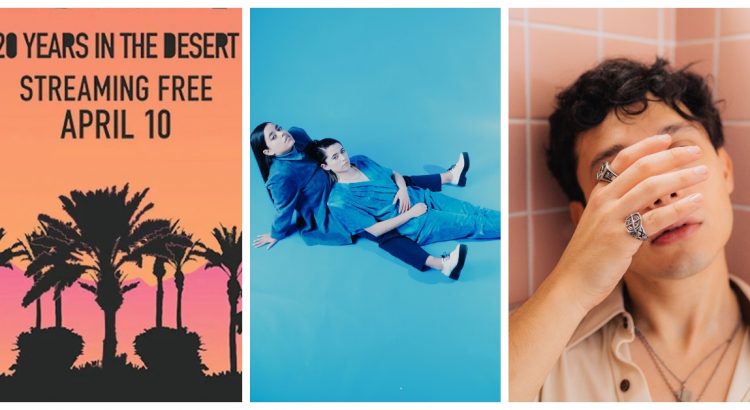 How are you doing this week? I have been feeling rather sorry for myself as the next wave of gig cancellations has started to come through (RIP festival season 2020). An abundance of leftover Easter chocolate has (sort of) softened the blow, but I know that I’m not alone in saying that the uncertainty of this ever changing situation has cranked the anxiety levels up to eleven.

I am definitely not speaking for all of us here, but when the news broke that Coachella was being postponed to October, I felt rather down about it. I understand that it’s a privilege to feel this way when there are much more pressing things happening in the world, but Coachella’s annual livestream has annually proven itself to be an accessible and consistent platform for many music fans around the world. Over the past few years, I have tuned in religiously; back in 2017, I stayed up past an ungodly time to watch Father John Misty grace the main stage, and the Little Monster in me set a 5am alarm to make sure that I didn’t miss a second of Lady Gaga’s electrifying headline set.

In lieu of my beloved livestream, YouTube Originals’ new documentary, Coachella: 20 Years In The Desert, did a damn good job of transporting me to Empire Polo Club.

Coachella: 20 Years In The Desert

Given that the world is entirely devoid of gigs for the time being, the film seems to resonate on a deeper level if you view it with the current situation in mind. It beautifully illustrates what it means to actively engage with live music, and how such a practise can be life changing in so many ways, far beyond the realm of Coachella. Blimey — pass me the tissues!

Thankfully, it seems that I’m not the only one with a Coachella-shaped hole in my heart.  Today, sister duo REYNA have dropped their latest single, the aptly-titled Coachella. See what I did there?

REYNA weave their happy memories of the Californian festival into an indie-pop gem that plays with clean guitar lines and layers of slinky synths. The best part? They confidently deliver a punchy chorus that’ll have you dancing all day long. The single also comes with deftly woven threads of their Latin heritage; their native Spanish is incorporated into the bridge and Mariachi trumpets are suffused throughout.

Bored of self-isolation? Stick some glitter on your face, give this disco-lite ditty a spin and close your eyes. It’s the closest you’ll get to that festival feeling all summer.

Right, enough of me blabbering on about a festival that I have NEVER been to. Instead, let me introduce you to Alex O’aiza, who is another shining example of how many up-and-coming artists are pushing through this period of adversity via their creative outlets.

Alex O’aiza – Out Of My Mind

Alex O’aiza is trying to make sense of the Gen Z experience. While stuck in quarantine, the singer-songwriter has delivered a timely message about togetherness in a time of hardship wrapped up in a snappy, hook-laden single.  O’aiza blends textured samples with rolling, gritty guitar riffs to deliver a healthy dose of shimmering alt-pop. You’ll be hard-pushed to find yourself not hitting the repeat button after the first listen.

Even better, though, is the Instagram-themed video that O’aiza made during lockdown, which sees him travel through every goddamn filter the app has to offer. It definitely put a smile on my face, and I can almost guarantee that it will have the same effect on you.