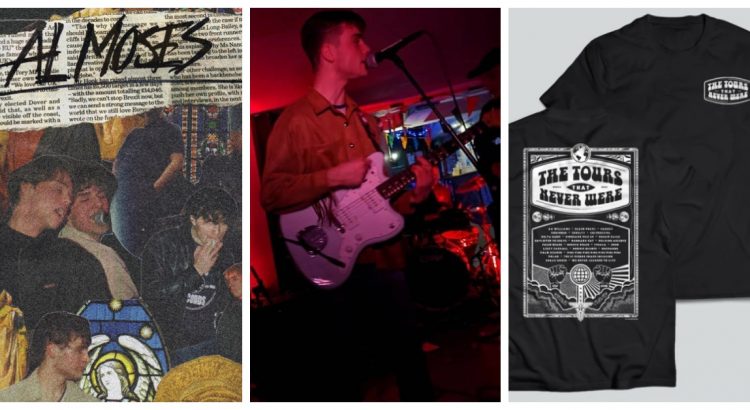 I have been trying to appreciate the small victories that have been happening around me, the main one being that this period of significant hardship has reminded me once again how grateful I am to have grown up in and around many independent venues across Cardiff.

At times, I have definitely been guilty of taking live music for granted. Growing up in a capital city with an ever-burgeoning musical landscape has always offered me a plethora of venues right on my doorstep, and in turn, multiple gigs have always been part of my weekly routine.

The current cancellation of all live events, then, has been quite a shock to the system and at times, it has become increasingly harder to work with a purpose now that my usual outlet is not currently an option. With that being said, we can only hope that a semblance of balance will be restored in the near future, but for now, we need to continue to support our local venues and artists in any way possible.

The best way to get directly involved from is to consider helping out Music Venue Trust’s Save Our Venues campaign, which is currently on its way to raising £1 million in aid of 556 independent venues that are currently are risk at permanent closure. Without our grassroots locales, most unsigned artists would lose any sort of opportunity to share their music beyond the spheres of social media. Our venues need our help to survive this unprecedented situation, so please, if you are in the position to do so, donate right here, right now.

Al Moses are one of the local acts that I’ve had the pleasure of following for a number of years, and watching their ever-increasing growth in popularity on a national level has always imbued a sense of pride in me. Their latest single, He Truly Is The Son Of God, seems rather apt for the minute.

Al Moses – He Truly Is The Son Of God

In a brisk two-and-a-half minutes, the South Wales rockers worship the grassroots acts that have helped them on their way up, flexing their garage-rock muscles via succinct riffs and a pointed narrative that documents (and exaggerates) what it means to come of age in and around decidedly messy areas of live music and nightlife. They commit this reckless spirit to He Truly Is The Son Of God perfectly, and so long as their local scene exists, there will be eternal value in this sort of escapist rock’n’roll.

On Facebook, the band said: “Son of God(…) was written when we were 18 and having a good time, going out and getting pissed at gigs in Cardiff. It acts as a reminder of the importance of our small and beloved music venues, especially those on Womanby Street where we grew up watching bands in Wales.” Well, I couldn’t have said it better myself.

Parish are another set of buzzmakers on the Cardiff circuit, having made the stages of the Moon, Clwb Ifor Bach and Tiny Rebel favourite haunts of theirs over the past few years. Earlier this week, they dropped new track Having It Better, and it’s most certainly a doozy.

Parish – Having It Better

Having It Better is a trouble-free ditty that dances in the balmy sun of long afternoons, as gentle guitar leads and a catchy pop structure work up a buoyant melody. It sees Parish show off some newfound psychedelic grooves, and marks a confident step forward for a group that could have easily got too comfortable with the basic chorus-and-verse mundanity of riff-heavy indie-rock.

Parish are starting to become certain of who they are, and they are bloody owning it, too. Add this one to your Spotify playlist, and thank me later when you see them hitting the big leagues in a few years’ time.

To rehash a point that I made in another feature last week; there are so many unsung heroes behind our favourite artists’ tours. From the managers, to the sound and lightning engineers, to the stage technicians and the drivers, gigs could simply not go ahead without them. The Tours That Never Were is a vital campaign that will have a drastic impact on the future of independent and underground acts being able to tour across the UK.

The Tours That Never Were

In partnership with Awesome Merchandise and Kerrang! Magazine’s Deputy Art Director, Aled Phillips, The Tours That Never Were is a non-profit fundraiser in aid of UK-based artists that were supposed to play shows between March and May 2020, alongside their crew and charities associated with the COVID-19 crisis.

What most of us are forgetting is that with each cancelled show, there is a domino effect of non-refundable bookings behind it, including hotel and travel costs. Exclusive festival line up-style t-shirts, totes, and posters with the names of affected artists are available here, and they include the likes of Pigs Pigs Pigs Pigs Pigs Pigs Pigs, Gender Roles, Dinosaur Pile-Up, Dream Nails, Haggard Cat, Cassels and Black Peaks, among others.

If you are in the position to help, I urge you to do your bit — your purchase will go much further than you can even imagine. 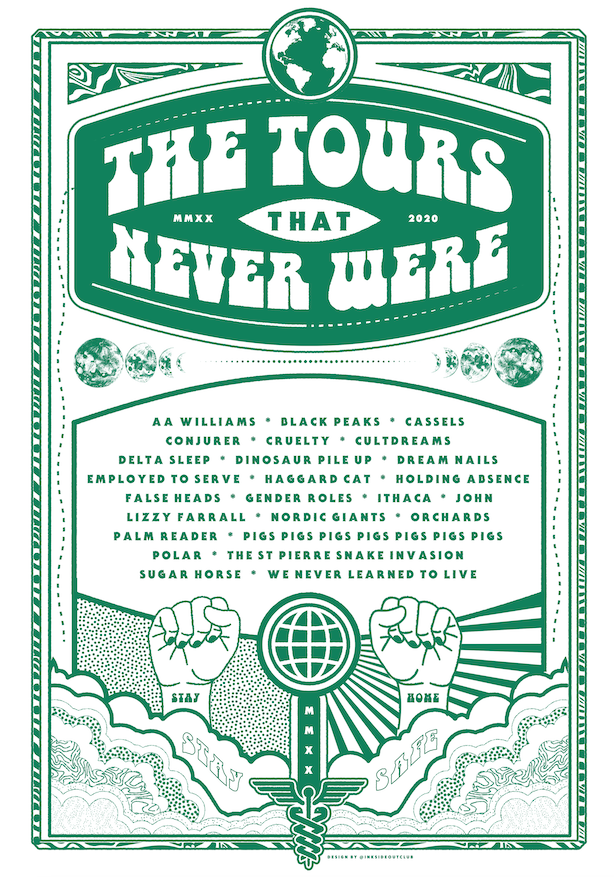