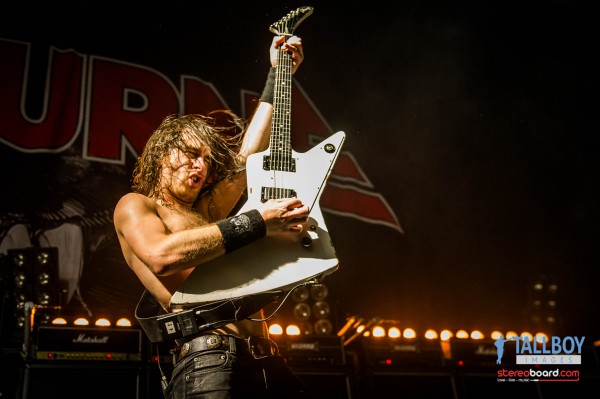 With their new album on the way, Jon Stickler saddled up for a midweek date with Airbourne and found the Australian rock devotees ready to ascend to the next level.

It’s a Wednesday at the end of the month. You’re knackered and skint. What do you do? You go to see Airbourne. That’s what you do.

For those yet to witness the Aussie rockers’ stage antics, it should be made clear that perma-shirtless frontman Joel O’Keeffe, his sticksman brother Ryan, guitarist David Roads and bassist Justin Street do not fuck about.

Roaring riffs, screaming vocals and shedload of beer combine for a whirlwind set at Cardiff’s Y Plas, with the band kicking off with an appropriate opener, Ready To Rock, before thrashing out cuts from their first two records, ‘Runnin’ Wild’ and ‘No Guts. No Glory’. Too Much Too Young Too Fast, Chewin’ the Fat and Diamond in the Rough all get an airing, as well as the rabid, swaggering title track from their 2013 album ‘Black Dog Barking’.

Evidently pleased to be back in the Welsh capital, the band embrace their welcome in true Airbourne style. Joel launches beer cans to fans aloft shoulders across the packed club before cracking cans open with his skull, soaking the stage and a good few rows at the front with glorious Brains. It might be a school night, but the crowd are wild and being so close to the action makes the show all the more special, particularly as Airbourne play a lot of festivals and have picked up their share of arena supports.

The band show no trace of nerves after returning to the road only a few weeks ago. Having wrapped up recording sessions for their new album, ‘Breakin’ Outta Hell’, they seem revitalised. Also, there isn’t a shred of scaling down to suit the smaller venue and a sweaty, beer-soaked Joel perches on the shoulders of his guitar tech to plough through the reverent crowd for a lap of the venue during an extended Girls In Black jam. The boozy fun continues back on the stage, with our fearless leader chugging the best part of a bottle before swaggering through Cheap Wine and Cheaper Women.

The band have their foot down and fire up all cylinders for the new record’s title track. With a quick change of backdrop, mayhem ensues and soon there isn’t a single person who isn’t headbanging, fist-pumping or clapping along. It’s not a bad response to a song that’s barely a month old.

The gutsy No Way But The Hard Way, or as Joel calls it tonight, No Way But The Cardiff Way, links up with Stand Up for Rock ‘N’ Roll to close the main set before drummer Ryan winds up the air-raid siren, signalling the band’s return to the stage for two final songs. Not content with your standard intro solo, Joel takes up a power stance on top of the backline to build up the pace for Live It Up before closing with the blistering Runnin’ Wild, dipping into a bit of Paranoid and Dirty Deeds on the way.

Not since the primal displays of Bon Scott and Angus Young have we seen such a performance of rock ‘n’ roll in its purest form. With the new record out in September, plus a nationwide trek following in November, this already high flying band are cruising clear skies on their way to being one of the biggest rock bands of the 21st century.