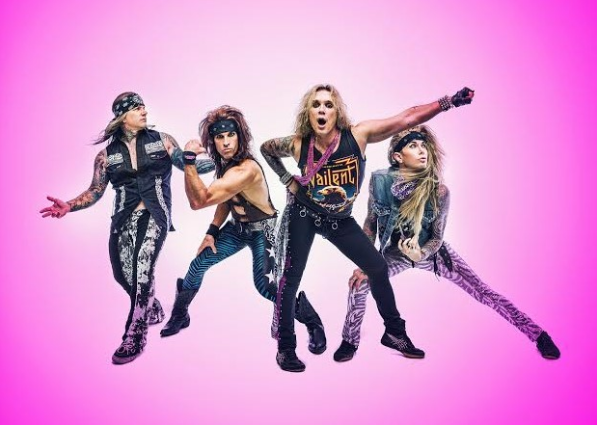 Jon Stickler waded into a sea of spandex and pop-punk nostalgia as Steel Panther, Bowling For Soup and Buckcherry hit the stage at the Motorpoint Arena in Cardiff. The result? Fun with a capital F.

Tonight, Cardiff gets its turn to become party central as Steel Panther, Bowling for Soup and Buckcherry rock into the Welsh capital for one of the more unlikely tours of the year: a potty-mouthed, pop-punk-via-glam-metal triple header.

Although most are a little surprised to see Buckcherry on the bill, their raw, gritty sound gets everyone excited and a high-octane performance straight out of the gate shows the band are excited to be here too. The snake-hipped, bare-chested Josh Todd bawls his way through a series of the band’s staples, including Sunshine, Ridin’, Gluttony, Out Of Line, Lit Up and their revved up cover of Icona Pop’s I Love It, Say Fuck It.

Next up are not-retired-anymore Texas pop-punk troupe Bowling For Soup, who use their moment in the spotlight to do what they do best: bounce fans back to their teenage years with a lively, humorous set. Old school hits 1985, Girl All The Bad Guys Want, High School Never Ends, Almost and The Last Rock Show are paired with their theme song to Phineas And Ferb and a mid-set cover of the song everyone mistakenly thinks they wrote: Stacy’s Mom by Fountains of Wayne. “Who wants to hear our song about Stacy’s Mom?” laughs frontman Jaret Reddick as many of the crowd cheer. “Yeah, that’s not our song.”

As the last few stragglers made their way in from the cold, Steel Panther waste no time in raising temperatures as they bring a taste of Sunset Strip’s sleazy underbelly to south Wales. Sounding tighter than guitarist Satchel’s spandex, all four lycra-clad lotharios turn the knobs (no pun intended) to 11 for a set drawn mainly from their 2009 debut ‘Feel The Steel’ and its 2011 follow up, ‘Balls Out’.

Opening with Eyes of a Panther and Just Like Tiger Woods, the mirth flows throughout their set. Some say they’re not a real band, while others moan that it’s all a gimmick but, among the hairspray and explicit jokes there are four astounding musicians who wouldn’t have got where they are if they didn’t know their shit inside out. On top of that, they bring together thousands of rock and metal fans tonight and if that’s not something to celebrate and shout about then I don’t want to know. Flawless fun.