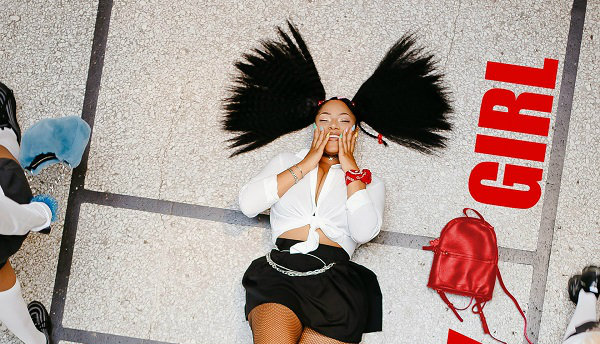 Time for a mix up. Instead of things we loved this week, for one edition only you lucky lot are going to be treated to things that we found to be on the spectrum of odd, weird, mesmerising, surreal, farfetched and just plain RANDOM. Kicking off the bunch of quirky things is Stefflon Don channelling farfalle pasta in one magnificent hairdo.

With a dancehall resurgence in our midst, it’s no surprise when new and revamped reggae beats flood the inbox. But something entirely different seems to have found its way through the cracks. Your life will be exactly 2.7 x better for this.

“Have you ever kissed a prawn and got a cold sore?”

If you wanna see these particularly super organisms live, they’re hitting up venues all over the UK in October.

After teasing fans with cryptic posters dotted around European cities, Aphex Twin has finally announced new material. A new EP, ‘Collapse’ gets a release on on September 14 through Warp Records. Richard D. James has also released the first cut from it: T69 Collapse.

The whole thing is your typical Aphex Twin attack on the senses with bleeps, clicks, lights and coding. It sounds like the future. But not the good kind with hover-boards and commercial space travel. The bad kind with evil robots that take over the human race.

Shears’ debut solo album is out now, and he plays UK shows next week.

I hope you feel a totally weirded out by this huge blob of outlandishness.

The festival market is HUGE. There are hundreds to choose from in the UK alone. So, taking a huge leap and starting a brand new one in the current landscape is a risky decision. How do you stand out?

Well, it helps to be backed by the organisers of Coachella, and to slot in at a venue that’s been part of the scene for a while. All Points East will take place in London’s Victoria Park this weekend, and it’s being pitched as a fest for discerning music fans.

It arrives complete with claims of the best sound the park has ever heard, along with the obligatory fairground rides and hipster street food vans. But the real answer to standing out? Same as it ever was. Get the right line up. 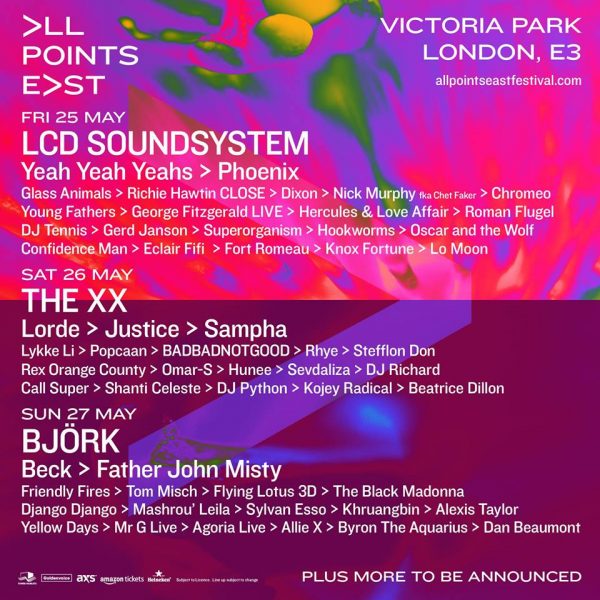 On paper, the All Points East bill is forward-thinking, eclectic, and most of all cool. Just like you, right? First up, comeback kings LCD Soundsystem take over the East Stage on Friday night. Last September saw the release of their critically acclaimed comeback ‘American Dream’, the first new material from the Brooklyn dance-punks since their 2011 Madison Square Garden sign off.

Frontman James Murphy will be hitting the decks throughout the weekend too, with his side project Despacio – a collaboration with David and Stephen Dewaele of Soulwax and 2manydjs.

The Saturday night headliners showcase smooth laid back beats, distinctive vocals, flawless productions skills and even a Mercury Prize – it could only be the XX. The idea will very much be to lose yourself in a concoction of Jamie XX, Romy Madley Croft and Oliver Sim’s vocal plaits, delicate reverb and ambient backgrounds.

Sunday’s headliner might be one of the most eclectic singers of a generation, and one of the few genuine legends we have left. Björk will draw a line under things with colourful art-pop and avant-garde everything. There’s a decent gender balance on the bill – no, it ain’t a 50/50 split, we’re a long way off that yet – but it is far more diverse than some.

Thankfully, there isn’t too much overlap in terms of stage clashes – a sticking point often met with disappointment from die-hard festival-goers. On this bill, the most difficult decision you’ll make will be between Flying Lotus 3D and Father John, or Rex Orange County and Laura Misch.

Possibly one of the most interesting parts of All Points East is the accompanying side shows. They make the festival feel like more of a sprawl, with an eclectic list of big names set to step in. On June 1, indie types Catfish and the Bottlemen like will be joined by fellow indie types Blossoms and the Hunna, while the National take over on Saturday June 2 with their biggest headline show to date.

Support there comes from from the War On Drugs, Public Service Broadcasting, This Is The Kit and loads more, while Nick Cave and some particular Bad Seeds close the entire event – after sets from none other than Patti Smith, St. Vincent and Courtney Barnett – on June 3. 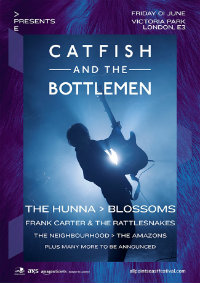 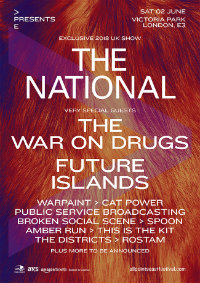 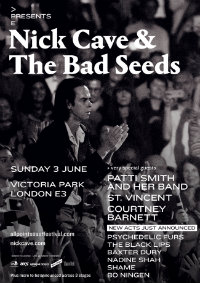 All Points East is an interesting proposition. It could be big, judging from the organisers and stellar line up. By the time Björk is done with us, it might be one of those events that elicits a response of jealousy and awe from your mates.

But it if it sounds like an overload of great bands all in one go, you’re also possibly on the money. Like most festivals it’ll likely be chaotic, expensive, and difficult to see past the tall guy in front of you while Matt Berninger does his thing or the many colours of Beck pass you by.

These are the risks, but early suggestions are that All Points East will hand you some of the best around on a historical-park-shaped platter.

There’s chaos in the air. KFC ran out of chicken and Fergie took an “artistic risk” with her rendition of the US anthem. Calm down by having a listen to these nice things.

On Tuesday, this London four-piece shared a video for their latest single, Ride. In it, we watch the band messing around and playing shows in between travelling through serene snowscapes and mountain ranges. The almost pizzicato guitar riff, heavy on both reverb and delay, gives it a simultaneously energetic and chilled out feel, really igniting that desperation to go on a road trip somewhere snowy right away. Ride is taken from new full-length ‘Feels Like Air’, which is due for release on April 6 via FrenchKiss Records. They’re also off on tour in May.

Superorganism – Reflections On A Screen

The latest offering from this hyper-modern pop group, Reflections on a Screen, deals with that whole rigmarole of modern day technology addiction, in a manner far more introspective and far less perky than their previous singles Something For Your M.I.N.D and Everybody Wants to Be Famous. The video captures exactly that feeling of spending too much time staring at a screen, zoning in and out of concentration. Their self titled debut is due on March 2 through Domino.

Last month, Mount Eerie announced ‘Now Only’, his follow-up to 2017’s ‘A Crow Looked At Me’, a heart-wrenching record inspired by the passing of songwriter Phil Elverum’s wife, Geneviève Castrée. His new track, Tintin in Tibet, is the new record’s opener, and is equally as gentle and crestfallen as its perfect predecessor. ‘Now Only’, will arrive on March 16 through his own label, P.W. Elverum & Sun.