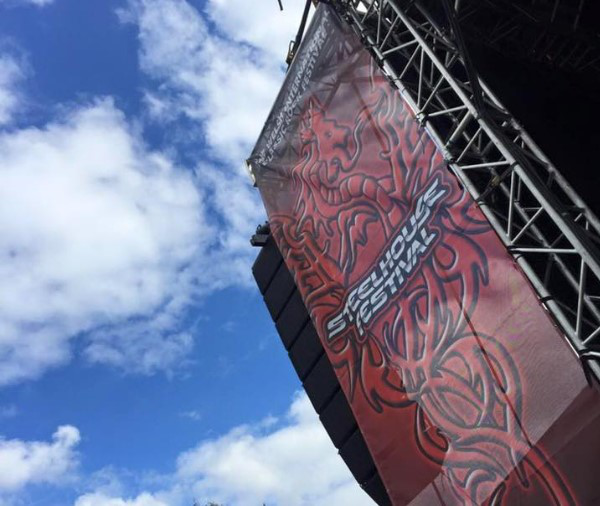 Steelhouse Festival has become a home away from home for the UK’s hard rock scene in recent years. Last weekend, Jon Stickler ventured up the mountain to see how the latest chapter in an underdog success story would play out.

Held high above Ebbw Vale and geared towards classic rock’s broad church, Steelhouse is one of the fastest growing festivals in Europe and already boasts previous performances from Europe, Dee Snider, Magnum, Michael Schenker, Saxon and UFO. Now in its sixth year, and despite some haunting flashbacks to 2015’s torrential downpours, this year the fearless beer-riddled faithful returned to the mountain to set a record attendance.

Following Friday night’s warm up show, featuring a south Wales showcase from Buffalo Summer, Those Damn Crows and Everyday Heroes, winners of a live Battle of the Bands competition held prior to the festival, Wigan’s riff warriors Bigfoot smashed open the main event with a monster Saturday lunchtime set comprising cuts from their ‘Stone Soldiers’ EP.

Dirty Thrills and Vega carried on the party, throwing their swaggering AOR solos and soaring vocals across the sun-drenched arena, before assured Bristol rockers Tax The Heat picked up the award for best dressed band of the weekend while roaring through songs from their recent record, ‘Fed To The Lions’, which, if you’ve got any sense, should be queued up in your playlist right now. Don’t miss out when they tour with Ash and Terrorvision this winter.

Having performed at the other end of the country in March, appearing on the bill at Hard Rock Hell Prog in Pwllheli, everyone’s favorite siblings in rock music, Finland’s Von Hertzen Brothers, made the world feel a little better with selections from last year’s ‘New Day Rising’. They can expect a very warm welcome when they return as part of the bill at this year’s Planet Rockstock in Porthcawl in December. Three Welsh shows in the space of 12 months…that’s what we like to see.

As the day progressed, the buzz was all about the evening session ahead of the headliners, Thunder. Psych-rockers Blues Pills exploded onto the stage with High Class Women from their 2015 self-titled debut, with Elin Larsson’s soulful tones just as breathtaking as the views from the mountain. The arena was enchanted by songs old and new, including a mesmerising cover of Jefferson Airplane’s Somebody to Love, building excitement ahead of the launch of the retro rockers’ second album, ‘Lady In Gold’, next month.

The Answer, performing at the festival for a record third time, celebrated the 10th anniversary of their superb debut album, ‘Rise’, by playing it in full before unleashing Spectacular and newbies Thief of Light and the title track from their upcoming new record, ‘Solas’. The Northern Irish band went down as one of the highlights of the weekend and their co-headline run with the Dead Daisies in November is quickly becoming one of the most talked about tours of the year in these circles.

There aren’t many bands that sit as comfortably as a Steelhouse headliner as Thunder. As soon as AC/DC’s Thunderstruck blasted out of the PA, we knew we were in for another magnificent display of showmanship. Danny Bowes was as energetic as ever, and still has one of the best voices in rock to boot, while lifelong chum and guitarist Luke Morley riffed through all of the classics. Performing with the confidence that comes from decades of touring the world, every minute of Wonder Years, Higher Ground, Backstreet Symphony, The Devil Made Me Do It, Love Walked In, Dirty Love and more was lapped up by a boisterous crowd.

Those up early enough on Sunday were greeted with, yes, you’ve guessed it, rain. A very wet day two kicked off around lunchtime with glam-rockers Last Great Dreamers, whose infectious, crunchy power-pop hooks went down well with a small, hungover and damp crowd. Despite everyone being pissed off with mother nature, the band, who originally operated during the 1990s before reforming in 2014, gave it their best shot at raising spirits.

Next up, Steelhouse regulars Hand of Dimes pulled in the masses with Nev MacDonald and former Kooga bandmate Neil Garland rolling out Moonlight Mile from their upcoming debut album before making way for the ballsy new blood in the shape of Toseland and Milton Keynes’ RavenEye. Look out for the latter’s debut album, ‘NOVA’, out on September 23.

With the collective mood changing for the better, the Dead Daisies just had to come along and disappoint. With so much hype swirling around the supergroup – featuring John Corabi, Doug Aldrich, Marco Mendoza, David Lowy and Brian Tichy – it was underwhelming that their hour long set included six covers, including Free’s All Right Now, Fortunate Son by Creedence Clearwater Revival and the Beatles’ Helter Skelter.

It came across as flat and lazy, especially when performed by such a competent ensemble of musicians. I was hoping to hear more from the band’s self titled debut and last year’s ‘Revolución’, but new tracks from their upcoming third album, ‘Make Some Noise’, at least kept me hanging around. Hopefully they’re firing on all cylinders when they headline Planet Rockstock in December. With the rain finally stopping around tea time, the energetic power-pop of Ginger Wildheart’s Hey! Hello! provided a much-needed adrenaline shot. Terrorvision, meanwhile, screamed confidence throughout their quite superb hit-packed set. They clearly had lots of fans on the mountain.

A monumentally silly performance from the Darkness closed the party, to the airing of mixed opinions. The band copped a lot of shit during the build up to the weekend, but as soon as they hit the stage we were reminded of just how huge an album ‘Permission To Land’ is. They’re not everyone’s cup of tea, but any doubts about their performance disappeared as they rocked through new songs from ‘Last Of Our Kind’, including Barbarian, Roaring Waters and Mudslide, alongside classics Black Shuck, Get Your Hands Off My Woman, Growing On Me, Friday Night and One Way Ticket. Gimme a D! Gimme an ARKNESS!

Following a savage closing party in the beer tent, it was time to dust off the hangover and endure the bone-shaking mountain trail back down to reality. Thank you, Steelhouse, for another fantastic few days at one of the most welcoming festivals out there.