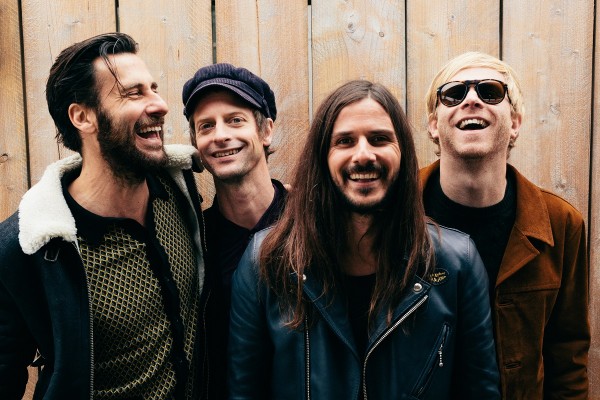 Shortly after the release of their second album, ‘White Bear’, the Temperance Movement were joined by the Sheepdogs at Cardiff’s Y Plas to drive a point home: rock ‘n’ roll is doing just fine, thanks. Jon Stickler was there.

The Sheepdogs are no longer Canada’s little blues-rock secret. Having put out ‘Future Nostalgia’ last year, their fifth full length to date, the first unsigned band to make the cover of Rolling Stone rattled out a short set of tight harmonies and retro licks, making for an enticing teaser ahead of their return to Cardiff as part of a headlining tour in April.

Two and a half years since the arrival of their acclaimed self-titled debut, the Temperance Movement are back to shout about their sophomore effort, the more polished ‘White Bear’, which has seen the band overcome the difficult second album syndrome to a fanfare of praise. Many are now happy to hail them as rock ‘n’ roll’s next big thing.

Seeming genuinely excited to be back, the band have slogged long and hard since their last UK outing and their pumped up confidence beamed throughout opening newbies Three Bullets and Oh Lorraine and their debut’s Midnight Black and Be Lucky. Switching between their two albums for the next 90 minutes, fusing blues-rock, soul, funk and traits of jazz, the quintet’s unbridled set sprawls from late ‘60s soul to ‘Sticky Fingers’-era Stones and the British blues explosion, to the vintage sounds of Crosby Stills And Nash and to contemporary rock bands such as Kasabian and the Black Keys.

Led by swaggering frontman Phil Campbell, who threw some truly magnificent shapes across every inch of the stage, the band further impressed with new songs Magnify, The Sun and Moon Roll Around Too Soon, White Bear, Get Yourself Free and Battle Lines, while also striking a chord with new fans via older favourites Pride, Only Friend, Take It Back. Smouldering saw Campbell’s honeyed voice really shine, while the guitar partnership of Paul Sayer and Matt White traded licks for an extended jam.

Ending with a three song encore, I’m Hope I’m Not Losing My Mind, A Pleasant Peace I Feel and Lovers And Fighters, surprisingly a trio of softer songs, this spirited return signalled the beginning of another huge year for one of the UK’s most rousing rock bands.

Head here to check out our recent interview with the Temperance Movement.